Stacy Lewis shares her routine on the range before a round. 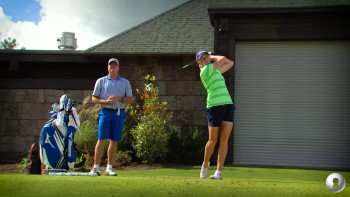 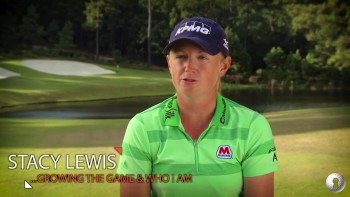 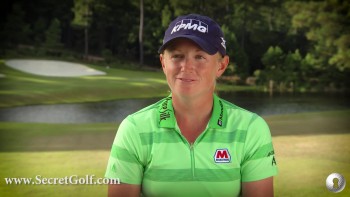 [MUSIC PLAYING] So we've moved our way up into an eight iron. You hit odds or evens or do you hit them all when you warm up?

I mean I kind of have a routine, a little but.

I know, imagine that. A golfer with a routine. But I go with the 55. I hit a few of the 50s just to get warmed up. And then I usually go eight iron, to five iron, to hybrid three wood, driver. And then go back down to a couple, like a six iron off of a tee. And then I go to a pitching wedge, and then I hit, I don't know if anybody else does, is I hit two drivers. And the first one is the shot I'm hitting off the first tee. Whether it's a draw or fade. And then the second one is the opposite. And then I hit a few with my 59, and then off we go.

Well can we do your routine today?

We might be here for awhile, but we can do it.

So that little thing you do did. I see you getting ready to walk in, do you do the same, your routine? We call it the pre-shot routine.

Mm-mhm. Yeah, the deal with the right foot is it's always there. I mean, it's more out of habit now than anything.

A good habit, of course, right?

A good habit to have. But yeah, I just kind of get in there like that.

A lot of people have to realize though, Stacy, that orientates you to that ball every time, the same way.

Right. And because something I, out of my surgery-- before my surgery, my hips were kind of, they were turned to the left. And so coming back when they got fixed, they get closed. And so I constantly have to fight my feet being closed.

Because of that, so this is--

You pull that left foot off?

Yeah that's kind of where this came from.

She hits her eight about as far as I do.