Secret Golf's Brian Harman explains step by step on how he lag putts. 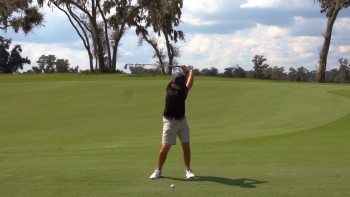 Help us understand what it takes to be a lag, you know, a good lag putter. Because obviously, two putts is the key.

What it's going to do at the end.

So like this right here, which isn't going to show up as well on camera as it is, but this is a pretty severe slope right here. Right? But the ball's still going pretty fast through here. So I'm really not that worried--

About this right here. I'm worried about this last 10 to 15 feet, where it comes back up this hill and then starts to breaking to the right. So that's the main part of the putt that I--

So you're saying if you're looking at the last 10 foot it kind of helps you read here. Because if you go over there, it's no way it's going to get back to that area. Right?

You're trying to get over to that spot where it's going to track in.

And also, with the correct-- that's what kills it. You know, that's what allows me to have speed through here. And then at the very end that last part's going to kill it.

And so, you know, obviously the strike and everything we talked about with ball position, all that's very important. But when I'm taking my-- when I'm taking my strokes here I'm just feeling, you know, I'm trying to just drip this one right into the front edge. That's how I think about long putts. And that, you know, kind of--

Are you looking at a length stroke or you--

Yeah. It's all about the length. So I'm hitting this-- and obviously if I'm in a tournament and I had this putt I have-- I have hit numerous practice putts. So I know the speed.

A lot of times when I'm playing a practice round or when I'm out here, I'll hit some of these long ones with my eyes closed.

I'll hit one with my eyes closed--

And then I will, to myself, I'll say, all right, that one should have gotten there. That one-- that one was a little too far.

Yes. So you'll know. Right? So you'll have an instinct.

So it's not like, I mean, I can't just come out here into a random place and expect to do great on these putts. It takes preparation to be--

Everything that, you know, goes into that might take some time reading the putt.

But once that-- my routine really only starts after I'm done with these, when I'm done with those practice strokes. Like, my routine starts kind of right here. That's when it-- that-- I will guarantee you from the time I touch that face--

Let me count it.

So I'm getting two just how I want it. I'm seeing the last--

Got it now. For one thousands. That's how you--

Told you I was a good putter.

That's how you lag putt.

Hey, you make them like that then you get to start working. See for me it's tough though because I'm right handed. So when I-- I have to switch putter hands--

To do the deal.

Oh. You gotta go the other way. We've got to maybe-- that could be an off-season-- we've got to work on that a little bit. Yeah. It's not smooth yet. You don't have it smooth yet.