Sometimes club selection can be tough. See how Brittany Lang chooses a hard 9 iron vs a soft 8 iron. 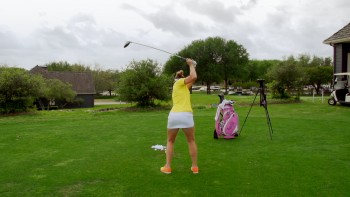 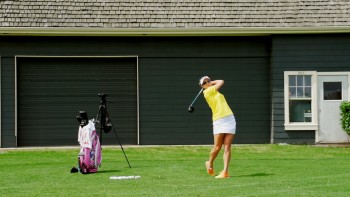 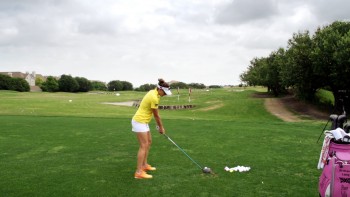 Well, from this angle, taking the water out of play, that's a very benign pin. It's pretty much a back center pin.

I have an easy shot.

The pin's back. You know, I'm working on being more aggressive. So today I'm going to try to get it to the hole, but a little bit short wouldn't kill you.

I'm 140. I thought the wind was down, but now it's kind of coming in. I'm still going to try to hit a hard nine. I still think that's going to be the play.

You go in low to make it skip or anything? Or not even?

Muscle up on a nine.

Muscle up on a nine.

I like it. Are you going to play the slope up there? Or you stay to the right of the flag? Or let the wind bring it any?

It's maybe 10 feet right. And just put a nice aggressive move on it. I think it should be good.

I might have to seriously consider go testing these irons. You just hit that one right by the hole. Oh.

That would have been cool.

You almost hole that? What a caddy!

So what was the net result of that? It came off, you know, obviously, it came off exactly what you thought it was in your mind's eye.

The 140 seemed long for the nine. Is the down slope help you get it there from 140 a little bit?

Yeah, definitely a little bit, but I--

That's a long line, isn't it? Or is it just down a little and it's hot?

Yeah, I think it's warm, it's down, but I prefer to swing-- take the nine and swing hard than take the hit easy. I prefer that.

Let's go get a birdie.