A plugged lie in the bunker can produces inconsistent result. Check out Gerina Piller's technique. 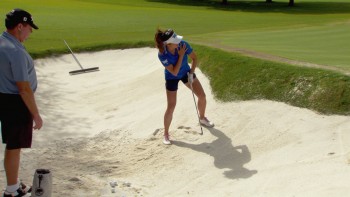 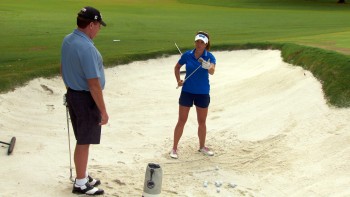 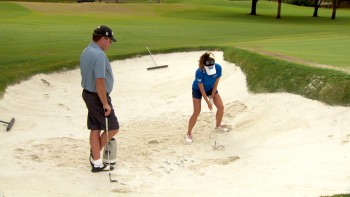 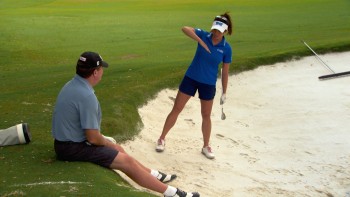 You hit a beautiful 7 iron. The wind got it, buried, full buried. What are you going to do now?

So unlike the other one, I'm going to close the face a little bit and try to hit as hard down I can so that-- I don't know if people are familiar, but the sand is what gets the ball out. You're hitting the sand. And that's what's getting the ball out. So you want to hit down on the sand with the closed club face. It's going to right up the face and get the ball out--

--which makes no sense. But, you know, golf's a game of opposites, right?

Hit down on it, ball goes up. Hit up on it, the ball goes down.

So here we go. Same kind of thing. Pick it up and almost recoil.

Stab the guy with a knife is what you said.

Knife and leave it in him.

Ah, look at that. That came out pretty good, didn't it?

So you're right about the particles. When you stab him like that, you try to not disturb the particles to much, so it all comes out in a chunk.

If you just blast it, all the particles go everywhere. The ball is going to go for sure. So you're exactly right. You try to get it in there and quietly hit it hard--