Gerina Piller explains her chipping technique from a tight lie which requires a steady head and body (Part 2). 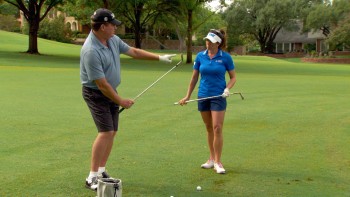 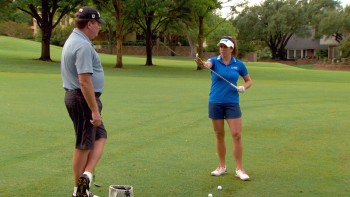 In fact, like, Phil Mickelson-- who has those killer shots-- he's kind of stopped doing that now because Dave Peltz convinced him that this was better odds to play low and with spin.

For sure, for sure. It's more consistent, I feel. So again--

It just depends on where I'm putting the ball.

So I'm really focusing on setting my spine angle here--

On this type of lie, you want your-- the bottom of your swing to be very consistent.

The targets over there.

Because I can do it as much as possible and I don't have to worry about not-- getting underneath it too much because I have that sideward spin. And I don't know if you've noticed, but I'm a little taller on this one.

Yeah, you were down lower.

Because I wanted to use the bounce.

I'm a little taller, so that it kind of uses this--

Catch more of the toe area.

And you know, Phil Rogers told me once-- and I'm sure you'll agree, once I tell you. If the toe is up a little bit-- if you did hit it fat, the restriction-- it keeps opening the face. If you're down in here and you hit the toe first, it's going to close it.

So if you're on-- he told me one thing-- big takeaway from Phil Rogers was if the toe is up or the toe-- the heel is up, if you catch it fat, it keeps opening the face.

It keeps that way.

Right. And it just really-- it doesn't allow for more of a U like we talked about. On this type of shot, you really don't want your club to be in the ground very-- a lot. You want to be--

A little more angle of attack and a little left face open to get that extra spin. Because it's such a short shot. See, that was a lower one.

However, ton of spin.