Check out Gerina Piller and her coach Mike Wright discuss what she works on mechanically in her swing (Part 1). 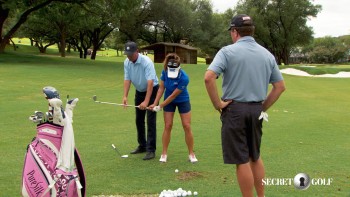 So we're here at a very famous piece of turf. This is where Hogan practiced. And you're Mike Wright who's the-- I guess you were the head pro. You're the director of golf here at Shady Oaks. You were one of the last employees of Mr. Hogan, is that correct?

Well, I really wasn't his employee, because he's a member of the club. But he took an interest in the club and was very influential in my life and me being here today.

And you, of course, helped Gerina with her game. And we're lucky enough to have you come over to her channel and talk to us a little bit. We've been working on all of her other stuff this morning, putting, chipping, sand, et cetera. But I think this is-- Is this the strength of her game over here?

You know she's strong in every category.

She was strong over there.

She's strong in every category.

She's definitely got a gift of hitting the ball solidly, which is something that's hard to teach. You try to help people that hit it solid, but it's hard to make somebody just hit the ball solid every time like she does. So when did you two start helping Gerina with her swing? And what do you work on? And how do you do it?

Well, we started-- We were debating that earlier. Gerina was it-- We'll say--

In the beginning of the season 2012. I'd known Gerina slightly before that. She's friends with another tour player that's a member here. And so I was traveling with her and had the chance to be with Gerina during her first British Open experience where her caddy was hurt. I was the only man standing and carried her bag for 18 holes--

--and had to like I wasn't tired for three hours. So I got to know her there a little bit. And then I think later, the beginning of the next year, we started working. And, obviously, somebody like Gerina is good way before they even met an instructor. So we just helped put little polish on it. She doesn't need a whole lot of me these days.

What does she do good? And what do you watch for? Because I know for me, you know, my coach is Australia took a very much attitude that you do that, you know, she's the one doing all the work here, but there's things that, obviously, it's clear to all of us that we need to watch.

Yeah, there's trends that certainly all good players have. And with Gerina, I think, at the time that we started, I think she was maybe in a trap of trying to swing like everybody else thought everybody should swing at the time. And so, you know--

Yeah, it's a big trap. And it's common. And as you see most tour players now, you see you constantly trying-- guys are trying to trap the ball and swing left. And Gerina was kind of in that mode and really didn't seem to be having as much success. And so as I tried to teach her, and she was hitting kind of a-- I would call like a feathery little fade out there that was getting eaten up in the wind.

Do you agree Gerina?

And so we started talking about how to control the trajectory and have a more consistent shot pattern. And we found that, basically, with her, it's easy for her to cut the ball, but was hard to draw it. So we kind of go against the trends these days in that we try to, basically, almost teach a hook swing that does not produce a hook.