Hitting low draws require some knowhow. Check out what Gerina Piller does in her swing to hit it consistently. 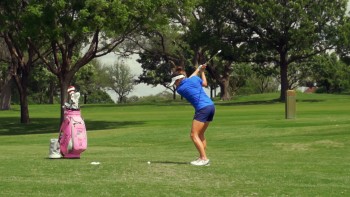 Low draw. OK, so we talked about it a little bit in the bunker. Me and my coach I like to have these little sayings and whatnot.

Things to keep our attention.

Yes. So we're going to buy some insurance. And so when you buy insurance with the low draw you're obviously not going to play it up in your stance. You don't want to hit up on it. So I want to put it back in my stance just a little bit. Another insurance is low club face. A little shut. And it's not crazy.

A little bit. A couple degrees.

My eyes sees as shut, which is probably square. I'm more of an open faced player. And another thing is I'm just going to shut my shoulders a little more than I think. And as I rehearse you can tell I'm kind of rehearsing and seeing inside out.

In out with a closed face, right?

Chase it down that line.

And keep your body up on top of it or something to keep it lower or more lean?

Not so much. The ball position's kind of going to take care of that. And obviously the club face being a little shut, it's going to deal off the club.