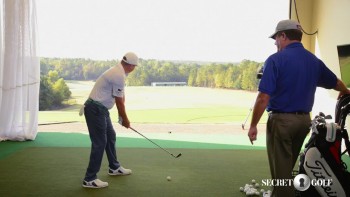 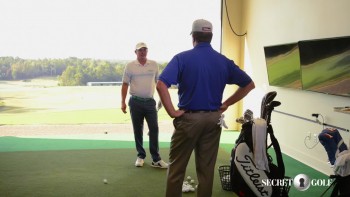 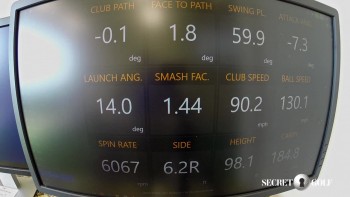 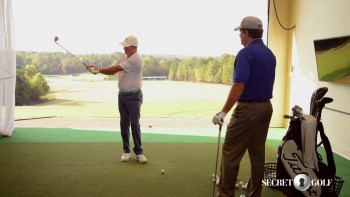 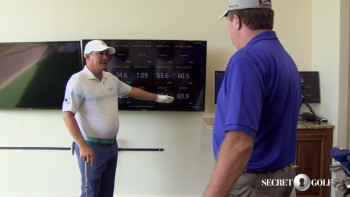 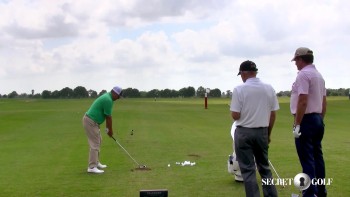 Yeah. I work with this full swing, a good bit.

Yeah, 45. I haven't hit a lot of balls yet this morning, but we'll get there.

Club par, that would be like when you're playing ping-pong, what--

What path you're coming in on. Yeah.

Whether it's in to out, over the top, whatever that-- you're going to explain that?

What is face to path?

That's the relation that the face is pointing to your path.

So you could have a path going inside out, but the face could be closed to that? Or open?

Yeah. And that's important to us, because that's how we make the ball curve.

Swing plane is basically the plane that you're swinging on and the degree of, the degrees. So the lower you swing--

I would assume that's not that important to you.

I like to check that, because that tells me if I've got too much in to out, too much separation. Because my handle will get high, so my-- I'll have a high number on swing plane.

Right, I want that handle low, kind of in my hip pocket. So that-- I can feel that, but I can also see it.

There's been a talk in magazines, and a lot of people talk about that the tour players have a certain range they stay in.

Like, it's always down, it's just how much down until we get to the driver, of course. But is that relevant, is that important to you?

To me it is, because I get the shaft leaning too much. Attack angle is basically--

How much down, how much the shaft is leaning. I like to play the ball back a little bit, so my attack angle can get up.

Yeah, like when I'm playing good, I'm usually in that-- you know, these numbers are close to zero. This number is a little bit lower than what the lie angle is on my club, so my 9 iron is a 63 lie angle. So it'll be 63 or lower. That means I'm not having a high angle. And then attack angle with my nine's going to be somewhere around eight.

Seven would be ideal. Eight's pretty good for me. So once these numbers come up, then we'll be able to see the other numbers, too. So we'll see how I'm swinging right now. You know, and this--

And you don't put a lot of pressure on yourself, you know, we're just doing this to show people how you use this tool. But when you won this year, Careerbuilder's, you were zeroed out.

I'm probably making nine out of 10 swings under 1.0 on both club fat-- club path and face to path.

So we'll see what we got. A lot of it depends-- also the TrackMan's aimed, we have an aimpoint, so a lot of it you got to aim right. Yeah, you've got to--

It's a missile. It's measuring a missile here.

And here's the thing, I can already tell you what that's gonna be, that's a little bit path to the left and probably an open face, because it went right.

So there's attack angle, 85, which you thought it was. You're 62 is basically what your club is bad at.

The face is open as you're coming in from, what, in to out a little bit? Or the other way?

No, I was swinging left.