We all have a beginning to our golfing journey. Learn all about the beginning of Brittany Lang's story. 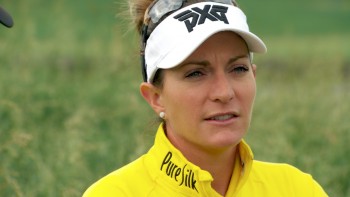 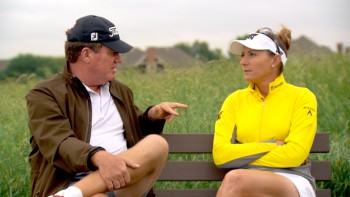 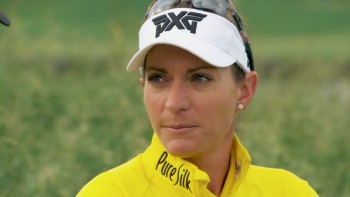 So we're in McKinney, Texas with the US open champ. That's cool.

What has been the difference for you now as opposed to then. You know, 19 is early to win the US Open.

Very early. Yeah, you know, I've always had a lot of physical ability, just natural, and I think mentally I worked really hard on getting mentally strong and staying in the moment and not being so blown away by being in a final group or winning a tournament. And it took me a long time. It took me seven years to win my first event, and then four more to win my first major, but I still have a little ways to go. But mentally, I didn't have it naturally, and I worked hard and I'm just mentally tougher now.

So you-- everyone has their story of how they got to where they were. You were sort of a young golfer girl, you played early and you were-- tell us about that. You started when you were little, and you played in events and--

Yeah. I come-- I come from a very athletic family who played all kinds of sports. My first sports were basketball and tennis, and my dad played rugby at Ohio University and he's very athletic. And he-- after college he fell in love with golf.

Doe he got any stitches to prove it? Because I played rugby for a while.

A lot of broken bones, a lot broken legs and ankles and all kinds of stuff.

But, yeah, he's a-- he's a great athlete, as is my mom. But we played a lot of basketball and tennis, and anyway after college, after he played rugby, he picked up golf and he just loved it and he got down to a single digit and he's like, I want my kids to play this, they can be injury free, it's a great game of integrity.

Now, how many siblings do you have?

He's four years older, Luke. And Luke was a great golfer. But anyway, then I got into golf. I picked up a club at eight, and then I started kind of practicing about 10, and then--

My dad always got like the local club pro to take a look at my swing and everything like that, but nothing too much.

I was 12, I was playing basketball and tennis and all kinds of sports, softball, and I was like I'm going to do this. And my parents were like, no, we want you to play all the sports and be a kid and have fun. I was like nope, I'm just going to play golf and you know here in Texas you can play all day every day, year round.

So you started playing all the junior events, you went through the AJGA and you did well in all those. And did you have other tour players that you know now that were coming up at the same time as you?

So they were all in the same--

Yeah, all in a-- well, Stacy, I played high school golf with. She's from Houston, but yeah.

She played at Woodlands?

She wasn't that good though, was she?

Yes, she didn't peak till college. She was kind of an average player, and then she got her surgery, and after-- in college she just took off.

We heard about that story with her, with her scoliosis and everything.

He had no, you know, he had no skills, really, that he knew of--

--when he went to college.

You know, like she kept coming back, trying to do it. When you-- so when that was going on, you went through the AJGA, so your natural thing next would have would have been high school golf. Were you good in high school?

Your team was good and all that.

When you were 14 or something.

And strong, you're strong?

And then you went to Duke. Were you thinking about, like, tour golf then or you wanted to do-- I mean, I know you love Duke. Duke is a great place, right? North Carolina.

Was that because you were just itching to get out and try the next level? You had beaten everyone at that level, because I know for me, when I was coming up in Australia, the reason I came to America was I had beaten all the kids in Australia down there, so there wasn't anything else. I wanted to see if I could beat the guys in college.

Sure. No, the same type deal. You know, I never-- I always wanted to play on tour and I always thought I'd be successful, but I never thought I'd be able to leave college early to do it. I didn't think I was that good and you know, after my first year my brother was telling me, he's like, you're good enough to go now. I'm like, no I'm not. So I stayed one more year and we won a national title. I had won six events, and so we decided then after I had played in some LPGA events and played well and said, OK, I can do this.