Bradley Hughes demonstrates the key points of hitting out of a divot. 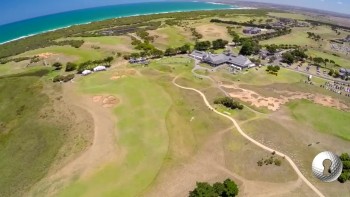 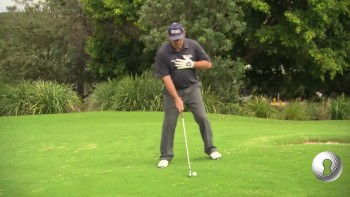 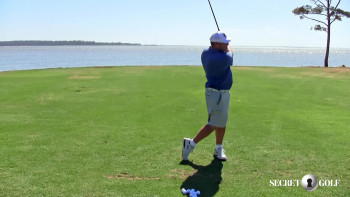 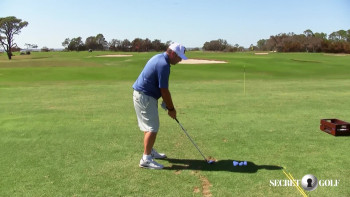 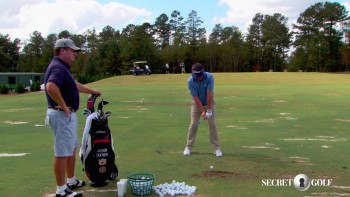 Golf's not fair sometimes. I've hit a really nice drive down the middle of the fairway right in the middle of a divot. We often feel a bit hard done by with this, but it's not that bad. Let me show you how to play the ball out of a divot, and it really involves adding to the divot.

So while it may look bad this ball in the divot is actually a reasonably easy shot if I know what I've got to do. So I need to add to the divot that I'm already in.

And the best way to do that, obviously, would be to move the ball back in my stance so I can feel a sharper angle of attack. I need to, because this ball is now below the surface in a little depression, I can't swing on my normal path because I will not hit the ball very well. I'll either hit the ground behind the ball or I'll thin the ball.

And I don't want to play the ball in my normal position because for me to feel like I have to get that club under and through I don't want to just guide my hands, arms, and club head at the ball. I want to set myself up in a position where I'm guaranteed to make that descending blow.

So we will move the ball back in our stance. Now, I feel my sternum or my center is ahead of the ball. That would be my normal ball position for this club.

Now, we're going to move it here. And as a result, you can see my center is ahead. So I don't have to now try to get that club down and on the ball. I'm already in position to make it happen.

So I'm going to add a divot to the divot. And I'm also going to use a pivot. So I've got a divot with a pivot.

So I don't want to just use my hands and arms and guide down. My strike, my timing, my ability to put that club underneath the ball and get the ball on the grooves properly is going to be diminished just by doing that.

So if I have the ball back in my stance, I've increased my angle of attack to hit down on the ball, and then what I want to do is not just quit. I want to add the pivot. So I've added the divot, add the pivot. That keeps the club moving so it works down and through. And I make a bigger divot than what we already had my ball in.

It's a pretty easy shot. As you can see, I've increased that divot double its size. Ball came out really nice. Got a descending blow. Still got to spin the ball. It's a really easy way to get in position to hit that ball properly.

We don't want to be set up funny where we have to try and make something happen. Get in the right position. Understand where you need to be in relation to make this shot work. And you'll be able to do it each and every time.